Why AutoResetEvent is slow and how to synchronize threads in .NET

All of the modern processors are multi-cored even the low-end embedded ones. This means that software have to be written in a different manner to take advantage of the currently underutilized extra cores.

The problem is generally very simple: I have one book but two people are trying to read/write from it – how to solve the problem so the overall performance is faster than with a single guy (many processors, one shared memory).

There are many different ways to synchronize these workers and some of them are really efficient and others are just terribly slow.

The good news is, that from the first generation of i7 processors (Nehalem) the processor level synchronization primitives became really fast – Intel did a good job, so it’s on average 60% faster than it used to be on the P4 processors.

These synchronization primitives are XCHG and CMPXCHG commands: the first one replaces a value with another one in a single step, the second one replaces the value if it equals to a parameter (a sample implementation later in the article). To make them atomic, the processor supports a LOCK modifier, so these commands (even though they take longer time than a single clock cycle) cannot be interrupted.

Even on high level (C++, C#, Java…) the synchronization logics are built on these processor level primitives, so it is essential to know them if we want to get into multithreaded programming.

One of our enemies in multithreaded programming is context switching – this process takes place when a thread passes the execution to the other one. It has to save its state (processor level caches, TLB...) and the other one has to load his old saved one.

It is similar when the above mentioned book is passed from one worker to the other: the previous has to note the page number, pass the book to the new one; the new has to open the book at his own page, put on the reading glasses and start to work. The more frequent the context switching is, the more time we waste with it. If it is very frequent (too many things are running at the same time), the processor can get into a so called ‘trashing’ state, when basically no actual work is done.

So, now we know the basics, let’s see how to synchronize threads in C#. The following examples show strict synchronization, when the two threads are always switching each other (ABAB…) and just pure exclusivity where the two threads are never accessing the resources at the same time but they may repeat before the other can run, not guaranteeing the ABAB… pattern (but the number of runs are somewhat balanced because the operating system tries to schedule them fairly).

Simple spin lock implemented with a Boolean variable. The two threads are in a round-robin share, so the run scheme is ABABAB…

Synchronizing two threads using Monitor. The exclusivity is guaranteed but the run scheme is somewhat random: A…B…B…A…B… The number or A and B runs are roughly equivalent.

Using the CPU level XCHG, which is Interlocked.Exchange in the .NET framework. The run patter is somewhat random, but roughly balanced: A…B…B…A…B…

Synchronizing two threads using the CPU level CMPXCHG command, which is Interlocked.CompareExchange in the .NET framework. The run pattern is guaranteed to be ABABAB…

No synchronization at all, let the two threads run as they prefer, incrementing the two distinct variables. The run patter is somewhat random, but roughly balanced: A…B…B…A…B…

After running them for 10 seconds on an i7 Sandy Bridge, 4 core, 2.3GHz cpu, the results were quite interesting: 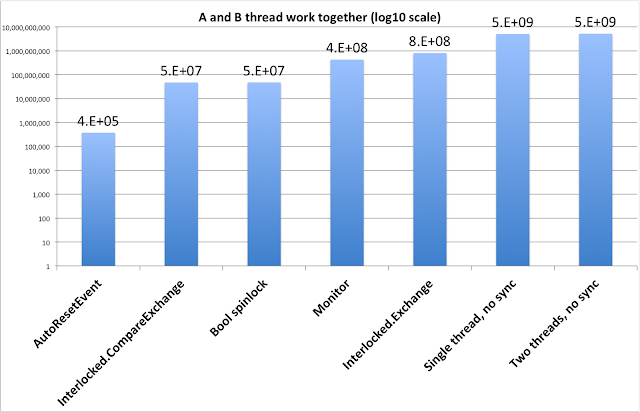 There are a couple of very important things to learn from this: under no circumstance should anyone use AutoResetEvent in a performance critical system, as it is 2 magnitudes (100) slower than any other solution.

It is the best to let the system run as it can without enforcing synchronization of any kind, as the operating system scheduler is very good, so if the threads do not wait for each other the performance will increase when can use more cores.

If some kind of common synchronized resource access is required, it is at least a magnitude slower than native performance. If possible, create different resources for different threads and remove synchronization.

Monitor is a very efficient way to synchronize threads, however, writing our own custom Interlocked.Exchange based lock doubles the performance.

If strict round-robin style synchronization is required, it is two magnitudes slower than native performance and does not really matter what implementation we use (interestingly).
.NET C# Performance Threading