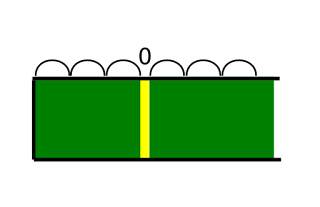 The Rabin-Karp rolling hash algorithm is excellent at finding a pattern in a large file or stream, but there is an even more interesting use case: creating content based chunks of a file to detect the changed blocks without doing a full byte-by-byte comparison.


The traditional computation of the hashes of interleaving windows generally works like this:

The Rabin-Karp implementation is very efficiently reuses the previous hash to calculate the new one:

So, to calculate the next window’s hash all we need to do is to remove the window’s first element's ‘hash value’ from the current hash and add the new to it.
Even though a simple mathematical addition would do fine, it’s usually not preferred because it can cause high collision rate among the hash values:

However, Rabin-Karp algorithm typically works with the powers of a prime number to do calculate the hash.

Lets say the prime is 7 (seven is not too good choice for hash in the MOD 2^32 number space):

Using the previous example, if we know the hash of [a,b,c] the next hash window is straightforward:

The nice thing about it is it requires constant number of operations and does not depend on the size of the window.

One of the (not too exciting) usages of the Rabin-Karp algorithm is pattern matching: finding a short string sample in a large text corpus. The reason it’s not too exciting because there are many other specifically text searching algorithms whose running time is generally better than Rabin-Karp (the latter runs in O(len(text) + len(pattern)) on average but worst case is O(len(text) * len(pattern)) when hash equality is too frequent).

However, the content-based file chunking is a very interesting application of the Rabin-Karp algorithm. Let’s see the following problem:

One’s got a large file which hash been modified at some location(s). Modification can be add/remove/replace. Check which sections of the file have been modified.


If we create a fixed size window (10 bytes) to check the file then apart from the first window ('This is te') every other have been modified, even though it’s clear that this is not what happened.

However, we can say we are aiming to get a window size about 16 bytes. This means, that if we used a 4 bit counter we would want to create a new window when the bits are all zeroes after incrementing it:

With this method, even if some parts of the file were modified, these modifications can only affect the current and potentially the next window, the rest would be identical slices.

So, we have a lot of reasonable sized chunks of a file. How to compare them to the original windows? The trivial answer would be to use byte-by-byte comparison but that is way too expensive. Simple hashing can be used to compare the content.

Google published a memory hardware error study in 2009 and they found that memory error rate is very common - much more than I'd think. The uncorrectable error rate (when the content of the memory corrupts irreversibly) is quite frequent too: