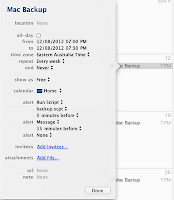 If the Mac OS X Time Machine backup frequency is too short or too long, you can manually schedule the backups using your calendar (yes, iCal). iCal is able to run AppleScript as an alert, so a very simple script that triggers the Time Machine backup will just do fine.

If you want to schedule it to run weekly instead of hourly, all you need to do is to turn off the automatic backup so the default scheduler will not run it too frequently and set up an weekly recurring iCal event in one of your calendar.

The alert should be a message to warn you (like 15 minutes before starting the backup) and the actual backup script. The following AppleScript will trigger the Time Machine backup. To save it, open up the AppleScript Editor, paste it and save wherever you want to.


When setting up the iCal event, add an alert saying ‘Run Script’ and choose the saved script.