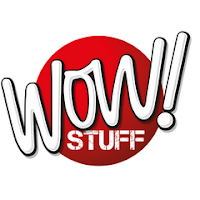 Once in a while it is worth looking around what kind of software or in this case hardware solutions were invented that did not catch enough attention. This post is about three hardware designs that amaze me.

The Otto engine is by far the most successful engine we know these days but it requires special kind of fuel like gasoline or gases to operate. In some cases it is not available but cheap heat source can be accessed, like burning solid materials or focusing solar energy with mirrors.

In this case a stirling engine can convert heat into mechanical movement in an easy way. The idea is based on the rules of thermodynamics: the temperature of the gas always equals to pressure multiplied by volume (within constant factor). This basically means if we heat up the gas it expands or the pressure needs to rise. Similarly, if we decrease the pressure, the volume or the temperature has to drop (or both moving together).

The stirling engine is basically a two cylinder/piston engine that moves the heat energy from the source to a cooling side using the above equation.
The phases of the engine are:
1 – Heat up the gas in the first cylinder which will expand, pushing the piston away and forcing the gas to flow into the second cylinder
2 – The piston in the second cylinder moves away while cooling the gas down, which reduces the pressure
3 – Both pistons in first and seconds cylinders move back to initial position with the cool gas
4 – The heat source heats the gas again, increasing the pressure and restarting the cycle
(note – there are one cylinder but two piston designs following the same logic)
The oscillation is quite fast between the two cylinders but usually the torque is quite low. To increase the torque, multiple cylinders can be added in parallel.

Electric pumps are extremely efficient in moving water but they need electricity which in some cases is not available – like remote areas or developing countries. The idea behind the ram water pump is the same that “kicks” your water hose when you are watering or washing your car but suddenly releasing the handle of the sprinkler gun. The reason the hose jumps is because the water is moving in the hose but when you block it, it has to stop – with a sharp deceleration. The quicker it needs to stop the bigger the pressure will be in the hose for a very short period of time.

The ram pump is basically a long tube that allows the water to gain speed in it – flowing in from a slow but not limited source like a river. This tube has a self-closing valve at its end that closes as the speed of the outflowing water increases, ultimately increasing the pressure in the tube. This pressure is now high enough to open the second one way valve at the end of the tube which will allow a small amount of high pressure water to flow into the “output” of the pump. This can push the water up quite high but the higher it needs to go the smaller amount the outflow will be: the pressure that is generated with this method is limited (usually by the speed of water in the tube, the rigidity of the tube and the speed of the closing valve).

The advantage of the ram pump is that is extremely simple to install and operate, the drawback is that the output flow is not constant and fairly limited. It is best suited to lift water from a river to a higher area like a water tower which can provide constant flow with constant pressure.

There are basically two types of jet engines: continuous combustion and non-continuous combustion engines. Most aircrafts use the former one as its operation is smooth and very controlled with practically constant throttle and no vibration. However, one of the most interesting non-continuous engines is the valveless pulse jet engine which does not have any moving part in it making it extremely simple and essentially maintenance free.

The idea is quite simple: if we could somehow create a combustion chamber that pushes out most of the exhaust gases after igniting the fuel, it would suck in fresh air as the gases would start to cool down, preparing for the next cycle. It turns out that it’s quite easy to create such a shape! To help the forward thrust both the intake (smaller) and exhaust (larger) pipe usually faces the same direction as some of the exhaust would still exit through intake because there are no valves in the system.

The result is a high frequency resonation consisting of tiny explosions in the chamber which will generate almost constant thrust. On the downside, the system needs external source of air flow to start, will get very hot and the series of tiny explosions make it extremely noisy. 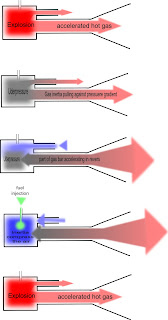