While I see the LINQ on the .NET platform one of the best if not the best language feature, I think the async-await idea is more like smoke in the mirror than anything else. Actually, it’s even worse: as the underlying operations are not trivial in some cases we are better off using linear code.

Idea based on desktop apps

The whole async-await idea is mostly coming from the cumbersomeness of desktop GUI applications and UI threads: only a single thread can modify the UI so when a long running process finishes we need to ask the UI thread to display the result for us but the operation itself cannot update the UI. It’s not a language problem; it’s a Windows/framework problem. However, Microsoft decided to “solve” it with a language feature, because:

While the latter is a great thing (hey Java, can you hear me?), adding a language feature because of marketing reasons is just plain wrong.

Aysnc-await is a unique language feature because it’s implemented more as code generator than anything else. Microsoft decided to support the async-await keywords with generated classes and a huge, somewhat undocumented framework that just “solves your problems”. The underlying implementation is so hidden, we tend to believe that it will just make the code faster somehow.

It will not. It will reorganize your code so you don’t have to write callbacks to complete the rest of the function when a long running process completes. The rewriting of your linear code to emulate the callbacks is massive, it worth to have a look at it using ILSpy. Anyhow, the Task<> that is created by an async function was there before, nothing new about it: it will be scheduled to run on the ThreadPool; which, again, was there from 1.0. However, in certain cases (like in a loop) the execution will be essentially sequential. No parallelism, no speedup.

On the other hand, while it can be really helpful in a desktop application it makes little or no sense at all in a server environment – like ASP.NET. Unfortunately VS2013 will generate sample ASP.NET project with async-awaits all over. It is wrong! Why?

Unfortunately Microsoft decided to return Task<>  in the new ASP.NET api calls forcing us to either call .Wait() or to use async-await. As typical HTTP is around 100-300ms the whole idea of asynchronously serving all requests in a synchronous environment is somewhat flawed. Remember, the user is actually waiting for your HTTP response.

Myth #2: Creating a thread is expensive

The biggest argument against creating a new thread for your long running task is that thread creation is expensive. But how expensive exactly? I did two quick measurements:

Let’s say 0.1ms per thread is the overhead and creating even 1000 threads is not too stressing for any modern machines – including my average spec laptop. Let’s say you create a brand new thread for every request (bad idea) and a request takes 100ms to complete. That’s 0.1% overhead. It wouldn’t really rush to optimize this overhead.

However, if you have more than 1000 requests per sec (which is more than 86 million requests per day) you really should use some kind of queuing to limit the number of concurrent threads – but all server environments like ASP.NET does that for you, don’t worry.

Myth #3: Concurrent programming can be easy

In an average environment concurrent programming is pretty much unnecessary – no real need to squeeze every computing bit out from a CPU so a standard sequential program will just do fine. For the rare cases when we need to update the UI of a desktop app or do a little background processing, async-await will be more than enough.

However, for any high performance computing projects forget about the features offered by any language or framework. You will need to understand work scheduling, synchronization, hardware bottlenecks, data layout patterns in memory, and in some cases even SIMD instructions and branch prediction. No IDE, programming language or framework will understand that for you. Even in concurrent languages like Google Go you have to understand synchronization quite well to efficiently use your resources.

As currently we operate with a few CPU cores on a large, common, shared memory, concurrent programming is far from trivial – my guess is that until we change our hardware architecture it always will be.

Out of curiosity I measured how long it would take to calculate the square root of a large amount of numbers (1000 times of 0, 1 million, 3 million numbers) divided into 1000 work units using different approaches (source codes below): 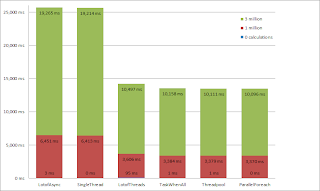 Couple things to take away from the chart:

I think it would be crucial for everyone to understand the internals of async-await before jumping in because really surprising side effects can and will pop up - there are just too many questions around weird behavior of async-await on Stackoverflow. However, the idea is very useful in situations where a callback code would severely undermine the readability of the code, especially on desktop apps. Anywhere else? Not too sure.